I feel like I've started at the beginning so many times that there's not really any point to a
"starting over" post.  Actually, at this point, I'm not sure there's any point to any post at all, since a year of radio silence (or however the heck long it's been) has pretty much lost me all of my meager (yet awesome!) audience anyway.  But this blog has never been about people reading, it's been about me writing it.

Two (three?) months into taekwondo classes now and I'm still loving it.  I'm also still "bad" at it.  That's mostly me being hard on myself, but also me being honest because I am so awkward, but whatever.  I am enjoying 90% of it, and that's more than I can say for most of life!

I decided this week to get back into running because I miss it.  A lot.  I miss who I was when I was running.  Even on the not so good days, it gave me confidence.  And a smaller ass.  Both things I'm wanting to have again.

On Saturday Andy and I are doing a stair climb to honor 9/11 firefighters, so I'm going to give myself a few days to re-learn how to walk after that, and then running starts at 5 a.m. on Tuesday.

360-odd days after that, I'll head back to Cleveland for another go at the NorthCoast 24 Hour Endurance run.  But for now, just baby steps.  Gotta start somewhere, right?
Posted by RunOrDi at 1:59 PM No comments:

When I signed up for NorthCoast 24 in 2014, it was a "What the heck am I doing?" kind of moment.  It sounded fun (as much as running is ever fun for me), and I thought, why not.  Bucket list kind of thing, right?

Afterwards I quit running entirely and just kind of blah-ed out. . . but then I signed up for NorthCoast 24 in 2015.  Because, hey, glutton for punishment.  And then after that, I . . . yup, quit running.   So for the past 2 + years, I haven't really been running.  I stopped considering myself a runner.  I gave away a bunch of my running clothes, and I put on weight.  Any semblance of "athlete" that I might have had was washed away.  I let it go.

Last week, while at my son's Taekwondo studio, the challenge was put to me to join a class.  Try Taekwondo, me?  I attempted to protest.

Me: "I'm out of shape."
Instructor: "Isn't that the whole point of exercise? To get in shape?"

So later that night I put on sweat pants and lined up with a bunch of kids (oh, did I mention that only 1 other adult is signed up, and the rest are kids?) and went through the motions.  Kicking, running, sit ups, push ups, kickboxing...  It was, honestly, exhilarating.  Embarrassing, too, at times, because I'm hyper self-conscious, and no longer had the anonymity of running alone on a trail.  But after 50 minutes, I bowed off the mats, and felt pretty good about myself.

I am by no means "good" at it.  I flail around a bit, and in last night's class, I actually hurt my foot by kicking wrong.  I'm only three classes in, though.  I will improve eventually.   Or I'll break myself. Either way, I will have gotten off the couch - again - and tried something that my younger self would never have tried.  The closer I get to 40, the stranger life gets.

Posted by RunOrDi at 9:19 AM No comments:

I'm really good at deciding to do things.  I'm less good at following through.   We've all heard that the road to hell is paved with good intentions, right?  Well, for me it's not so much hell as fat and lazy town.  Although, according to my Fitbit, I've been moving a lot more lately.  Not running, mind you (though I did do some yesterday), but chasing this little girl: 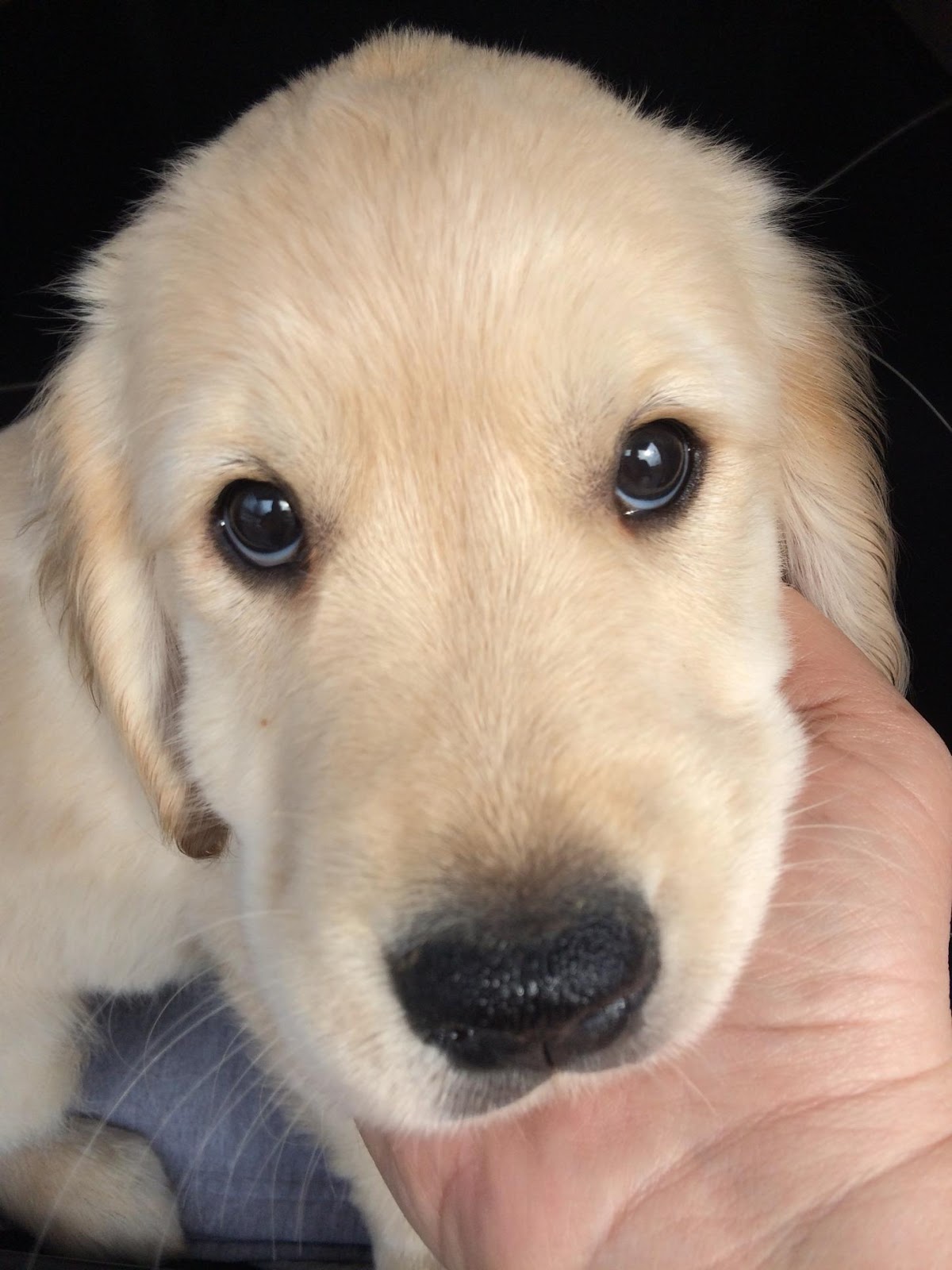 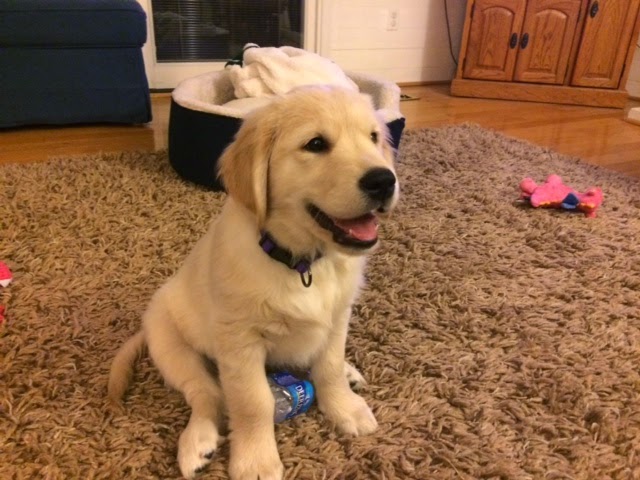 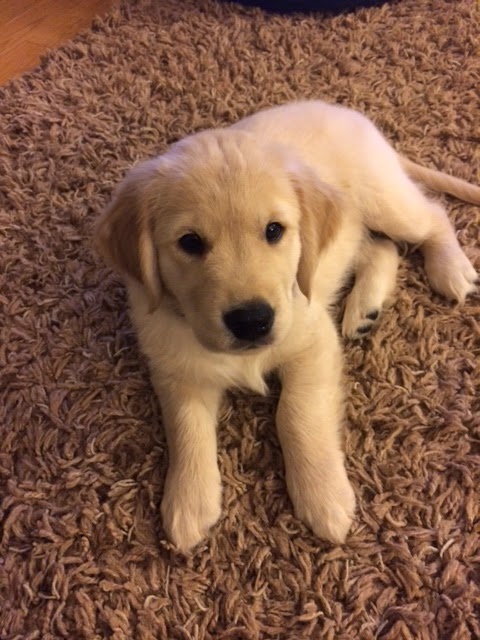 Adorable, right?  We got her a week ago today, pretty much completely unplanned.  I mean, we are dog people.  We knew we were going to get another dog eventually - we'd talked about maybe April, depending on whether or not I'd found a permanent job by then.

We'd talked about getting a Golden Retriever, because they're great dogs, and we figured probably a puppy.   But it was all talk.   Then about a week and a half ago, Andy gets a call from a breeder that he'd briefly spoken to ages ago.   She had three female puppies left, was he interested?  I think this was on a Wednesday.  Thursday, I interviewed for a job and thought it went pretty well. Friday I got approached about another job, out of the blue, and by Friday afternoon we were discussing puppy names.   Sunday, Andy drove down to Virginia while I cleaned the house with two oblivious kids.

Boy were THEY surprised when I said "Papa's bringing a friend over - do you want to see her picture?"  Boom.  Squeals, giggles, jumping up and down.  We are dog people.

So what does Sunny (short for Sunshine, my son's idea) have to do with me not getting my butt in gear and getting back on a regular running schedule?  Well.... puppy.  Middle of the night has to pee, puppy.  Gets up when you get up, puppy.  Have to supervise her pretty much constantly. puppy.

Therefore, my idea of getting up at 4:30 to run before my husband leaves to go to work is pretty  much out the window.  The past week has been go to bed, get up in the middle of the night to walk Sunny, go back to bed, get up at 5, let her out, feed her, walk her, take a shower, get the kids ready, go to work, come home, walk her, feed her, etc, etc, etc.  Fairly non stop puppy activity.

I think, though, that we're finally getting into a routine, and so hopefully things will even out soon and I'll be able to carve out some "me" time.

Of course, considering it's now day 3 of trying to write this post, maybe that's easier said than done.